- A minimalist puzzle game centering on the concept of non-decreasing sequences.

Each puzzle begins with a monochrome grid of numbers, plus a few colored cells marked with an X. Starting at these cells, you must link up numbers in non-decreasing order until the whole grid is filled with color.

In order to download this game you must purchase it at or above the minimum price of $2.99 USD. Your purchase comes with a Steam key. You will get access to the following files:

Finished the demo and loved it. Now that I've beaten the demo and downloaded the full game (purchased earlier in a bundle)... how do I skip to level 100? Do I HAVE to replay the first 100 levels?

Hello! If you played the downloadable version of the demo, you will be able to pick up right where you left off. If you played the browser version, it's impossible to access the browser's save data. No worries though, just send me an email to support@danijmn.com and I will provide a save file straight to level 101!

thanks so much for the prompt reply. I think I'll just replay them it's going quicker the second time through, lol. Seriously enjoying the game and the dope soundtrack.

Hahaha I understand! Thank you so much for the kind words, have fun!

Fun and interesting game. About 100 levels in they got difficult to the point it felt like too much effort, but I enjoyed my time with it

Amazing game, with a really chill and relaxing soundtrack. Really enjoyed it!

I'll just point out that despite the claim "each with a single solution", I found that levels 145 and 383 had at least two solutions, but that's just nitpicking :D

The music is so relaxing. I have it on my second monitor while working at home. I work. I do a couple of puzzles  and mellow to the tracks.

As the developer, knowing that you like the soundtrack well enough to listen to it while working is a really great compliment, thanks a lot!

By the way, you can listen to the soundtrack directly on the browser if you prefer (some tracks are not exactly the same because I did some remastering, but they're very similar): https://app.soundstripe.com/private_playlists/music/318541

(Although, I too got stuck on lvl 98 and, shamefully, had to look up the answer--that one was stupidly rough on my brain.)

great music as well!! i usually mute games i play

Hi! I'm really enjoying the game! I am however very stuck on lvl 98 and would love some help! thanks!

Thank you so much!

It was the first game I played in the bundle for Ukraine. I liked it so much I purchased it on my phone as well. Nice job!

Many thanks for both buying the bundle and supporting me! Enjoy!

Expressing my appreciation for the controls and interface here as well. Very slick and intuitive - could've easily been annoying but isn't. :D

I remember playing this on my phone a few years back. Pretty simple concept, but this is probably one of the best puzzle games I've ever played.

First thing that came to my mind is GMTK's video about tutorials. This game is a perfect example of a tutorial done right, seemlessly integrated in the gameplay, no text needed.

Controls are pretty much perfect on my opinion. When playing The Witness  I was really frustrated with drawing lines, it felt really clunky to me. Here it's very easy, and satisfying.

Thank you so much for the kind words, enjoy it!

How do I link Cardinal Chains bought here on itch.io with my steam account? I didn't found any key to get the key to insert on steam, does someone know how to do it?

if you bought it in a bundle, you don't get a key

It's itch.io, this website has it's own launcher. You can add this game to steam as a non-steam game (https://www.makeuseof.com/how-to-add-non-steam-games-to-steam-library/#:~:text=To%20add%20a%20non%2DSteam,applications%20installed%20on%20your%20system.)

This thing is very addictive

This was the first game I played out of the Bundle for Ukraine. Really enjoying the vibes.

Fantastic soundtrack. Played 50 levels and then just let the music play in the background after. Great game too!

As an aspiring game dev myself, how did you get such an array of music for the game? From fairly big names, no less! I assume you licenced the tracks; where should I go to do the same?

Can't wait to see what you make next!

Hello Harvey, thank you for the kind words!

Yes, I licensed the tracks from Soundstripe, which I highly recommend! In fact, you can listen to the whole soundtrack on their website through this link: https://app.soundstripe.com/private_playlists/music/318541

Best of luck to you!

Thanks! By the way, you can always check the solution book!

"Hm, this game is pretty long I'm on level 46. Lemme check how many levels there are- OH MY GOD."

if you liked hard games like this one i suggest you guys if you can play my game too it will be nice for me to get at least 1 euro out of my game Wazros.

have a nice day!

This game is extremely good. I appreciate the elegant simplicity in the core mechanics and the careful attention to pacing. The music also makes it easy to go forward. A way to have notes aside from the lines themselves would have been welcome, as I often find myself working backwards in the 1-only levels, but everything else is perfect.

This is a great game!

But in the WebGL build (using Firefox), I get an error after completing level 88: "An error occurred running the Unity content on this page. See your browser JavaScript console for more info. The error was: QuotaExceededError: The quota has been exceeded."

How much info do you write to local storage? (Unity PlayerPrefs?) It might be bit too much...

Thanks for reporting! It's not about the save data actually (which takes only a few bytes), it's about the build itself which is around 50 MB due to the size of the music files. I'm afraid there's nothing I can do about it since it depends on the user's local configurations, which in most cases allow for plenty more. But you can easily work around the issue by downloading the demo, which will provide a better experience anyway (better performance, better music quality, etc). Have fun!

Amazing game, just finished the first 100 levels, excited for what the next 400 have in store! Props also to the sfx and graphics, really well done.

someone help me on level 43 please -w-

Check out this guide: https://drive.google.com/file/d/1jf0anodq6dgJOMp5WpuypDZx3AyrWOoj/view?usp=shari...

Dang! Around level 28 the difficulty really kicks into high gear. I really love how the combination of paths and numbers gets the player to think outside the box. Great visuals and music as well. I enjoyed what I've played so far and will deff be coming back for more!

Congrats on the successful steam and mobile releases! Keep up the amazing work!

Are there any Steam keys left? I purchased this game in a bundle a while back and a Steam version would be convenient.

Can only handle that type of request by email, sorry!

I have been having such a wonderful time playing this! I'm a man who enjoys  a good puzzle game now and then. Haven't found many on mobile that really clicked with me, then on a chance I ran into this looking for games to play on my channel.

This is such a great casual puzzle game, great visuals and music, and it's going to sound like a weird thing to compliment, but how maneuverable the paths are; if you realize the line isn't right, you can click anywhere in it to restart from that block, or "erase" it with a different line, or click the start to reset the whole thing. It's just so satisfyingly user friendly. I've been playing it so much to relax and clear my head since I found it.

I'll admit I like to come into my gameplays blind so it wasn't until after recording that I found out this was in fact a mobile game already, so I do sound a bit ridiculous bringing up that it should be one X)
Reply
Daniel Nora1 year ago(+1)

That was a great video, thank you so much for playing! And yes, it's on mobile too (both on Android and iOS), with all features.

This is SO good for just $2.99, the game mechanics, the maps and how its difficulty ACTUALLY go up (not like normal puzzles :P). The music is EXCEPTIONALLY GOOD!! :)) It is SOOOOOOO good, it makes me want to just listen to it all day!! :) If I were a streamer, I'd definitely play this all day!!!! :)

Thank you! You can listen to the soundtrack here: https://app.soundstripe.com/private_playlists/music/318541

And about the puzzles... I just made them one by one!

is there anywhere I can listen to the soundtrack of this game?

Sure! Here's the link: https://app.soundstripe.com/private_playlists/music/318541

Quite a nice puzzle game. The design is clean and the controls feel good. I do think there are too many puzzles before any challenge really starts. (I would say it only began from puzzle 24) But since they are quick, it isn't a deal breaker. There are a few weirdly trivial puzzles right after difficult ones. Number 51 and 54 are examples.
While the change in background music is a good idea, I found the difference between the songs jarring, as it had a huge effect on the vibe of the experience.

This game is evil. Eeeeeeeeevil. When I first started playing it I was like “this is simple enough,” but that’s how puzzle games always get you, isn’t it? By about the fiftieth level I was in too deep to let it beat me. I made it to the end of the demo, but not without some serious mental yoga.

I think this might actually have the most polish I’ve ever seen in a puzzle game. I like how you can click and drag lines and just leave them to tinker with later if you need to, like you’re moving physical objects around as you think about the best solution. I also like how walking back lines can reset lines that you’ve overwritten, so you don’t lose too much progress if you realize you’ve made a mistake.

The music and aesthetics in this game are peerless for the genre. It keeps the experience interesting without being distracting. I don’t know what it is, but the music just stimulates me so that I never get tired of iterating through strategies for getting through the levels.

I think this is also a good game for demonstrating that puzzle games are harder to build than they look. It’s not just that this game has to contain a number of interesting puzzles built using a mechanic that’s easy to understand. The difficulty has to curve in order to reward solving a difficult challenge, so that some of the harder puzzles function as “boss fights.”

I don’t play a lot of puzzle games, but this one kept me playing until the bitter end no matter how frustrated I got, which I think is the highest possible recommendation I could give. Ten out of ten, would play more.

I love this comment. As the developer, I think you really nailed the points that I put the most effort on. Thank you so much, it really warms my heart!

By the way, if you love the soundtrack, you can listen online for free on the website of the company that it was licensed from (Soundstripe). Here's the full playlist: https://app.soundstripe.com/private_playlists/music/318541

this is the most puzzley puzzle game there is out there!

7 6 was the hardest level for me 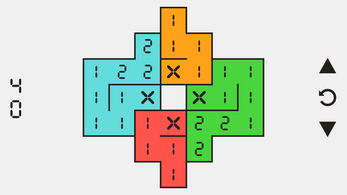 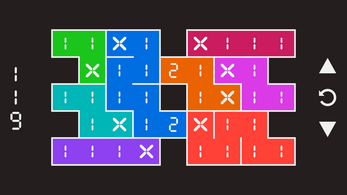 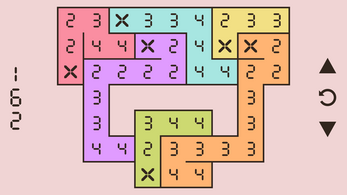 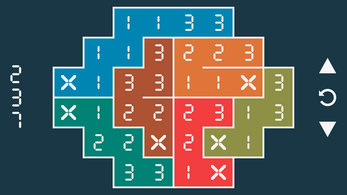 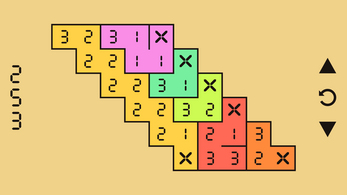 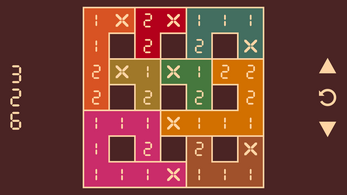